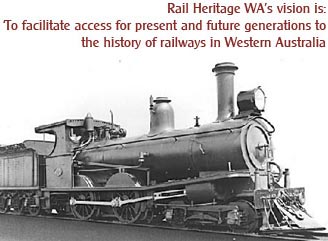 In 1917 Western Australia was finally linked by rail to the rest of the country. This Trans-Australian link was between Kalgoorlie and Port Augusta. Operated by the newly formed Commonwealth Railways, about half the track length was in WA, and construction began from each end. Thus whilst often overlooked, this rail link is very much a part of WA's rail history, especially as the construction of the railway was the 'carrot' offered to entice Western Australia to join the Federation of Australia in 1901.

As the Trans-Australian Railway was built to standard gauge, the Society was unable to accommodate any carriages from the Commonwealth Railways until it had access to the Midland Workshops. Simultaneously the Society was offered several carriages, dating back to the beginning of the railway, by Australian National in 1995. The carriages obtained included No.1, the very first passenger carriage for use on the Trans-Australian Railway. This was collected from South Australia in 1996 with four other carriages, and restoration commenced in 1999, with funding for materials from the Centenary of Federation projects. After about 40,000 volunteer hours, the work on these original cars was completed. These cars were the beginning of the Federation Train.

Some of these carriages are hired to tour operators predominantly on the "Spirit of the West" restaurant train but also on Kevin Pearce's 'Goldfield Experience' Tours.

An AVDP is being restored, investigation is being undertaken on EH54 and several sleeping cars await their turn.

In the 1960s the Bunbury Tourist Bureau commenced running vintage train tours with the WAGR using steam loco G233 (later named 'Leschenault Lady') and a number of old side-door compartment carriages. In later years the Lady and the carriages were given on permanent loan to the Leschenault railway Preservation Society.

When the railway yards were removed in Bunbury, the Vintage Train collection found a new home at Boyanup where the old Bunbury Goods Shed and Roundhouse had been at least partially relocated. Thus the Boyanup Museum was born.

By the early 1990s the Leschenault Railway Preservation Society was struggling for members and it was wound up with its assets coming to ARHS WA. The items on permanent loan from Westrail were later donated to ARHS. Thus Leschenault Lady - the oldest Australian built steam locomotive continued to be operational.

Unfortunately in 2005 the Boyanup Museum was closed - it is hoped that this is only temporary! The Vintage Train carriages are still in Boyanup and so Rail Heritage WA has taken a short-term lease of the property to enable conservation work on this historic collection of carriages. 'Leschenault Lady' is at the Rail Transport Museum after having spent several years operating on the Boulder Loopline.

Items for sale are available from the Museum when open, on general meeting nights, by mail or online here, items include:

'Midland's Might and How Steam Works', a short DVD (7min) featuring steam locomotive S 549 'Greenmount'. It has interviews with a former driver, modern and historic footage, together with an animation explaining 'How Steam Works' with S549 as the example. This professional production is available for only $10 plus postage (if required).